Sun Rock: The Renewable Energy Powerhouse of the Future

Nobody can accuse high-profile Dutch firm MVRDV of taking a half-hearted approach to ensuring its upcoming project Sun Rock is sustainable. Most of the building will be covered with solar panels and, according to the firm, it’s expected to generate around 1 million kWh of green energy annually, which will easily ensure its self-sufficient operation, with the excess sent to the grid.

Sun Rock was commissioned by Taiwan’s government-owned power company Taipower and will be used as a visitor center and for the storage and maintenance of renewable energy equipment. Though most of its facade will be covered in solar panels, there will be windows and vents for natural ventilation mixed in too. To put MVRDV’s figure of almost 1 million kWh of energy per year into perspective, US government studies have shown that the average US house uses around 11,000 kWh per year. And that figure could be even higher by the time it’s completed.

“The site for Taipower’s new facility receives a significant amount of solar exposure throughout the year, and so the rounded shape of Sun Rock is designed to maximize how much of that sunlight can be harnessed for energy,” explained MVRDV. “The facade maximizes this solar potential with a series of pleats, which support photovoltaic panels (mixed in with windows, where required) on their upper surface. The angle of these pleats is adjusted on all parts of the facade to maximize the energy-generating potential of the solar panels.

“As a result of these measures, the building can support at least 4,000 square meters [roughly 43,000 sq ft] of PV panels that would generate almost 1 million kilowatt-hours of clean energy per year – an amount of energy equivalent to burning 85 tons of crude oil – and making the building completely self-sufficient. Further design options are under consideration that would add an even larger area of PV panels, with calculations showing the building could generate up to 1.7 million kWh annually to contribute energy to the grid.” 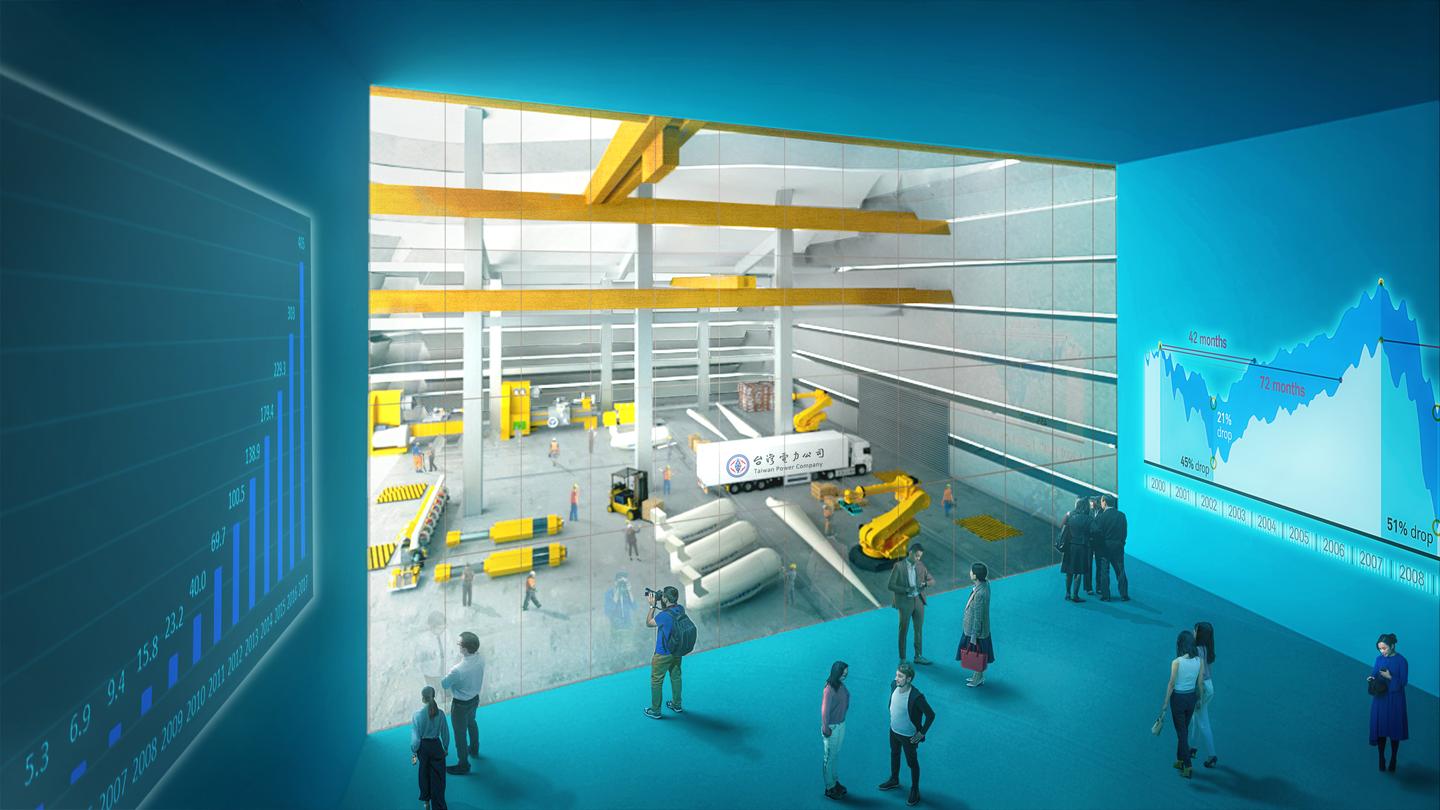 The building will measure 12,900 sq m (roughly 138,000 sq ft), and contain a maintenance workshop, warehouse, and an office inside. On the first floor, a gallery space will offer the public a view onto the maintenance workshop, allowing them to see solar panels and wind turbine blades being repaired. Another gallery will be included on the top floor, while at roof level will be a tree-filled terrace for visitors and employees.

Additionally, there will also be a “Data Room” inside an atrium that will host real-time displays detailing Taipower’s operations and the amount of renewable energy the company generates.