Solar powers more than half of Australia’s grid for first time, coal at record low

The combined output of rooftop and large scale solar met more than half of Australia’s grid demand for the first time on Sunday, as records for renewable output and share of demand continued to tumble across the country and coal output hit a record low.

As the National Party met on Sunday to consider the Liberal Party proposals for a net zero emissions target, with some MPs determined to “make coal great again”, the share of solar in Australia’s main grid, known as the National Electricity Market, reached a peak of 51.8 per cent.

It is the first time that the share of solar has delivered more than 50 per cent of NEM demand at any one time, and it exceeded that level for about 2.5 hours from just before 11am (AEST) to just after 1pm. It hit its peak of 51.8 per cent at 11.55am AEST (the grid doesn’t do daylight saving).

The previous record, according to Geoff Eldridge, of NEMlog, was 47.4 per cent earlier this month. The new benchmark might have been higher were it not for the number of solar farms that were obliged by their contracts to turn themselves off as prices went below zero.

On Saturday, for instance, the amount of curtailment in Queensland reached a massive 1.8GW, according to NEMlog, as prices hit the market floor of minus $1,000/MWh (usually caused by coal generators desperate to be dispatched so they don’t have to be switched off. You can read more here at Watt Clarity).

Another major milestone on Sunday noted by the Australian Energy Market Operator was a new low for minimum demand, at just 12,936 MW, which is more than a gigawatt below the previous record set only a week earlier. The growing amounts of rooftop solar was again the main factor.

It completed yet another weekend of records in the main grid and individual states over the weekend, as the spring season (marked by relatively low demand and mostly good sunshine and good wind recources) continued to set new benchmarks.

The most striking one – given the context of the Nationals meeting – was the plunge to a new record low of coal output.

Black coal (produced in NSW and Queensland) hit a new low of 6,105MW, according to Geoff Eldridge of NEMlog, well down from the previous record low of 6,699MW set earlier this month.

And the combined output of all coal (including brown coal from Victoria) hit a new low of 8,843MW, down from its previous low of 8,986MW.

Other records of note included the highest share of renewables in the NSW grid (64.38 per cent), the lowest output of black coal in NSW (2,420MW), AND the highest output for rooftop solar in Queensland (2,960MW). 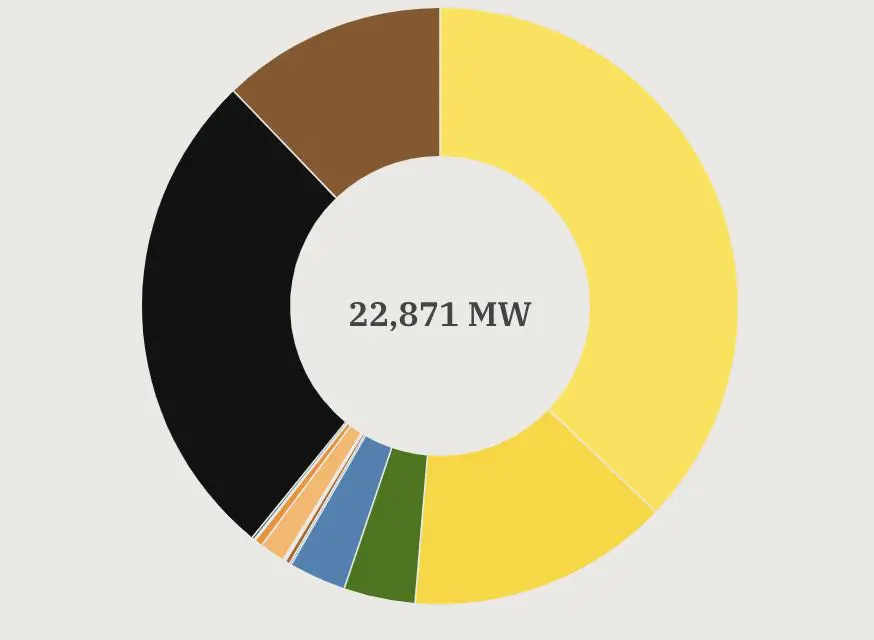 The new solar benchmark on Sunday came mostly from rooftop solar PV, which delivered up to a 38 per cent share of demand.

That is expected to double over the next five years to up to 75 per cent of demand, according to the Australian Energy Market Operator, with the combined share of renewables also expected to reach 100 per cent by 2025, according to AEMO’s new “base case” assumptions.

That outcome, will depend on a combination of excellent sunny conditions, mild weather and low demand. AEMO has already put in place coping mechanisms, including its “solar switch off” protocols to deal with any grid security risks that could emerge from what would be a world-first for a gigawatt scale grid.