Did you know that today’s photovoltaic cells are based on a lucky finding by Alexandre Becquerel way back in 1839? He placed an electrode in a conductive solution, and when it was hit by sunlight a current was generated. The first solar cell, however, wasn’t produced until 1883, Charles Fritts produced a 1%-efficiency selenium-on-gold photovoltaic panel.

The photovoltaic effect was then followed by the discovery of the photoelectric effect, which Albert Einstein would publish a paper about in 1904. A flurry of photoelectric advances followed, until eventually, in 1954, AT&T Bell Laboratories created the first modern silicon solar cell. Bell Labs also produced the solar cells used in early space satellites like the Vanguard 1. Soyuz 1, in 1967, would also use solar cells, and would become the first manned spacecraft to do so.

Between the 1950s and 70s, solar power fell out of grace. Producing solar cells was still prohibitively expensive ($250 per watt), and their efficiency still hadn’t broken past the 10% mark. As the semiconductor industry flourished, however, and as the size of silicon boules and the integrated circuit market boomed, the cost of solar panels plummeted. By 1973, solar panels had reached 15% efficiency, and could be produced for around $10 per watt.

Today, the solar power industry is very healthy indeed. Take a look at the number of photovoltaic power stations that opened in 2010. Now it’s just a matter of when solar power will overtake coal in terms of cost and efficiency, which could occur in the next few years. 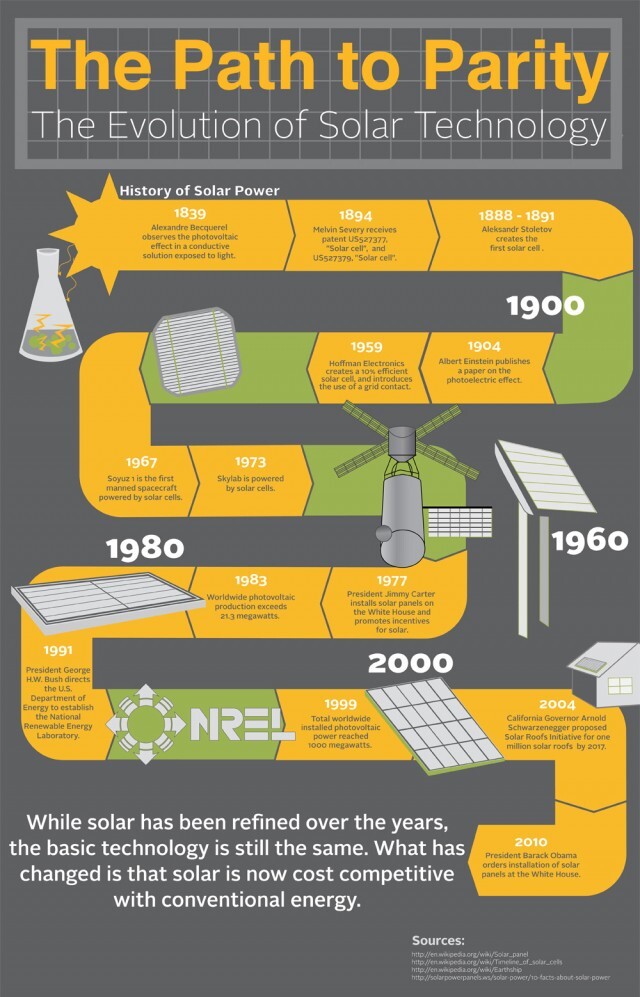