One of Australia’s largest transmission network operators, presiding over the nation’s most coal dependent state, says the national grid could – and should – be 100% renewable powered by 2035, with all coal generation phased out completely by 2032.

Transgrid, which manages and operates the high voltage electricity transmission network in New South Wales and the ACT on Tuesday released its Energy Vision – a 70-plus page report exploring six possible scenarios for the National Electricity Market out to 2050.

Based on detailed modelling undertaken in partnership with the CSIRO, ClimateWorks Australia and The Brattle Group, the report details an “unstoppable” transition that, in five out of six scenarios, takes the NEM to more that 70% renewables by 2035 and more than 90% by 2050. 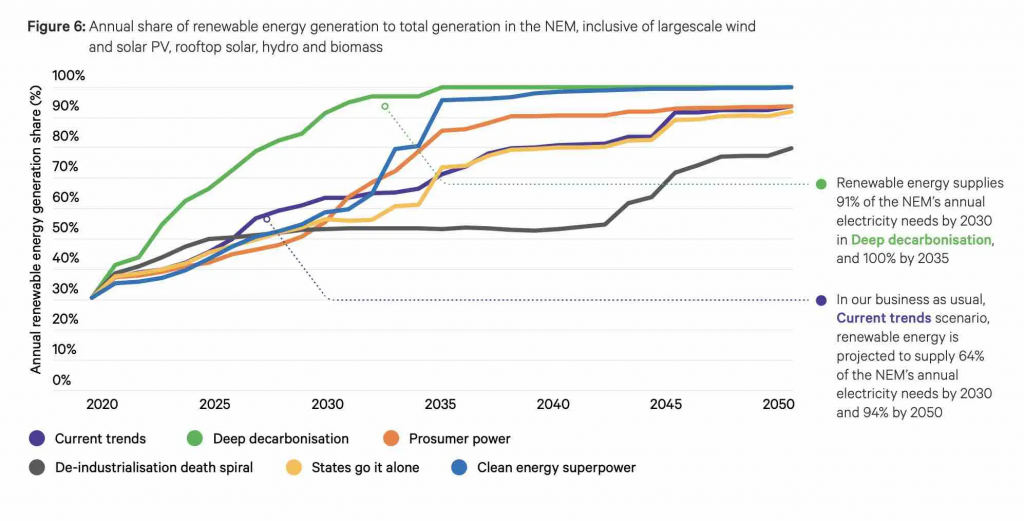 But the most impressive trajectory is in the scenario called Deep Decarbonisation – the only scenario consistent with the Paris Agreement’s targeted 1.5°C limit on warming – where the supply of renewable energy on the NEM is forecast to reach an astonishing 91% as early as 2030.

“In this scenario, Australia achieves net zero emission and a 100% renewable power system by 2035, internal combustion engine vehicles are completely phased out by 2050, replaced primarily by electric vehicles, and hydrogen is used for heavy transport, industry and peaking electricity generation.”

On this pathway, Transgrid forecasts there will be 159GW of variable renewable energy capacity and 33GW of dispatchable storage required across the NEM by 2050.

Furthermore, this scenario also sees all of Australia’s remaining coal-fired power generation leaving the market by 2032, “reducing economy-wide emissions at the lowest cost.”

Impressive as it sounds, this is by no means impossible – the NSW Coalition government’s energy minister Matt Kean recently said his state could phase out the use of coal for electricity generation as early as 2030, the same year it now aims to have slashed emissions by 50% on 2005 levels.

Indeed, as COP26 in Glasgow fast approaches, Australia has seen a flurry of major industry players and former naysayers officially come to the party on the huge potential for a rapid shift to renewables – even as the federal government remains conspicuously outside of the tent.

But coming from a company whose network was originally built around big, centralised fossil fuel power plants, the assertion from Transgrid that the NEM could be 91% renewable powered within the decade is worth some attention.

Of course, Transgrid has skin in the decarbonisation game – with plans for several major grid infrastructure upgrades, including a $180 million spend on the link between Wagga and Spark Infrastructure’s proposed Dinawan renewable energy hub; part of the EnergyConnect project linking NSW, South Australia and Victoria.

But while these network and interconnector upgrades will be crucial to the rapid shift to renewables, Transgrid future grid planning manager, Jesse Steinfeld, says it will be driven by a combination of factors, largely rooted in basic economics.

“The first major factor (driving the speed of the Deep Decarbonisation transition) is the economics of renewables squeezing out coal,” Steinfeld told RenewEconomy.

According to Transgrid’s analysis, by 2030 – and, crucially, with decarbonisation objectives aligned to a 1.5°C temperature trajectory – “as much as 18GW of coal capacity could be withdrawn from the NEM – 13GW more than currently anticipated.”

On renewables, the report notes that the cost of solar PV in Australia is projected to fall a further 70% by 2050, 50% for wind and 60% for grid batteries.

That last figure will be all important, because to reach the level of renewables forecast in Transgrid’s Deep Decarbonisation scenario, “exponential” growth in the amount of grid-scale energy storage will be needed.

“The electricity system is what underpins decarbonisation, supports decarbonisation of the rest of the economy,” said Steinfeld. “As you get closer to 80%, 85-90%, the amount of energy storage rises exponentionally.” 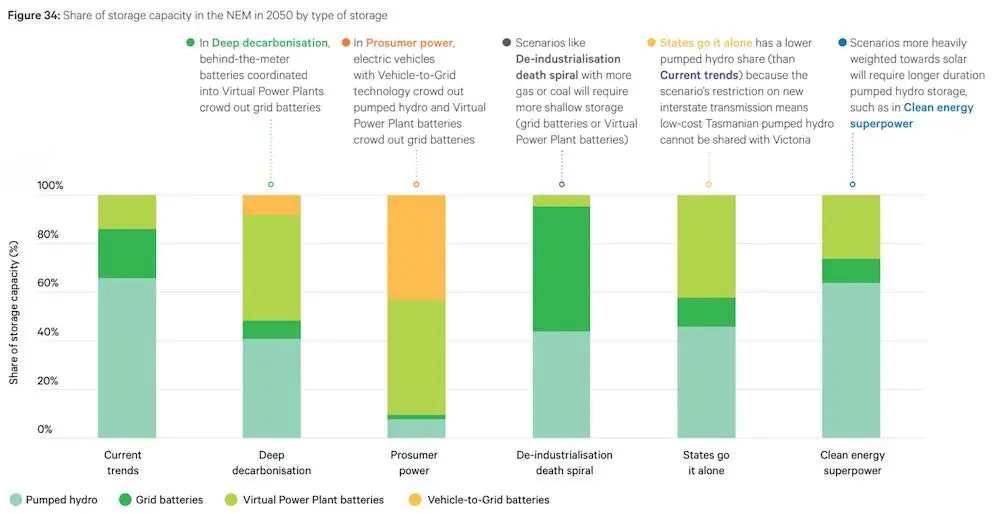 The second main factor driving the rapid shift to renewables, Steinfeld adds, is the valuing of decarbonisation, “which means that closing high emitting generation will be one of the lowest cost measures” – particularly for consumers.

According to the report, under a Deep Decarbonisation scenario, households with a single electric vehicle could be at least $900/year better off, when considering expenditure on electricity, rooftop solar, batteries and electric vehicles. 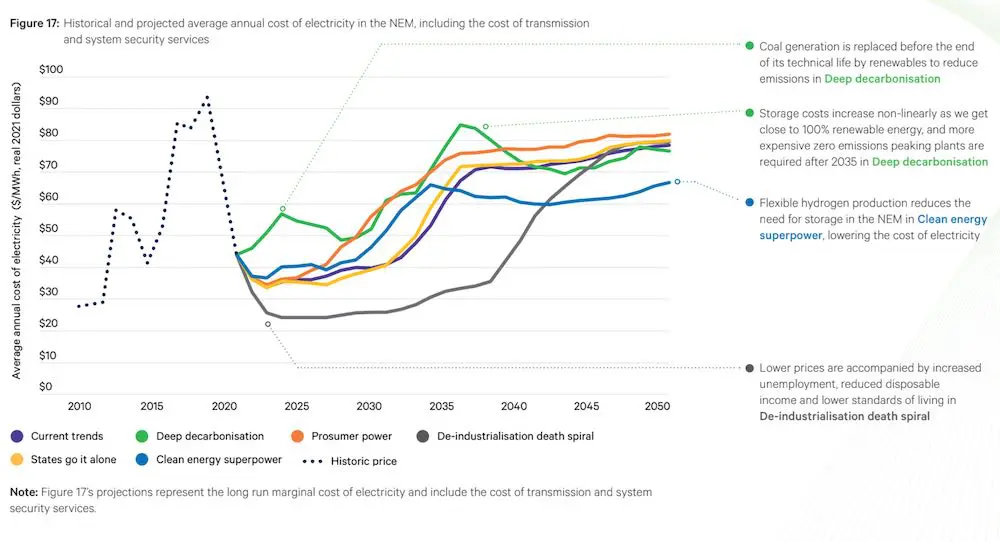 “Our vision is for Australia to become a global clean energy leader – not just decarbonising our own economy, but also supporting the decarbonisation of the global economy,” the report says.

“From our analysis, we see optimal advantage for Australia in a combination of two scenarios: first Deep decarbonisation, which then morphs into Australia becoming a Clean energy superpower.”

As you can see in the charts below, this scenario – which is set to a 2°C of warming trajectory – keeps coal in the system for longer than the Deep Decarbonisation model, to account for a faster shift to electrification across all sectors and a “least-cost” hydrogen production pathway.

But it’s not all about large-scale renewables, big batteries and renewable hydrogen production, Transgrid also sees behind-the-meter generation led by rooftop solar as being key to the transition.

According to the Prosumer Power scenario – which Transgrid says “stress tests the implications of exceptionally high distributed energy resource penetration on the grid – more than 80% of Australian homes have rooftop solar by 2050, the generation from which is supplying 27% of the NEM’s needs. 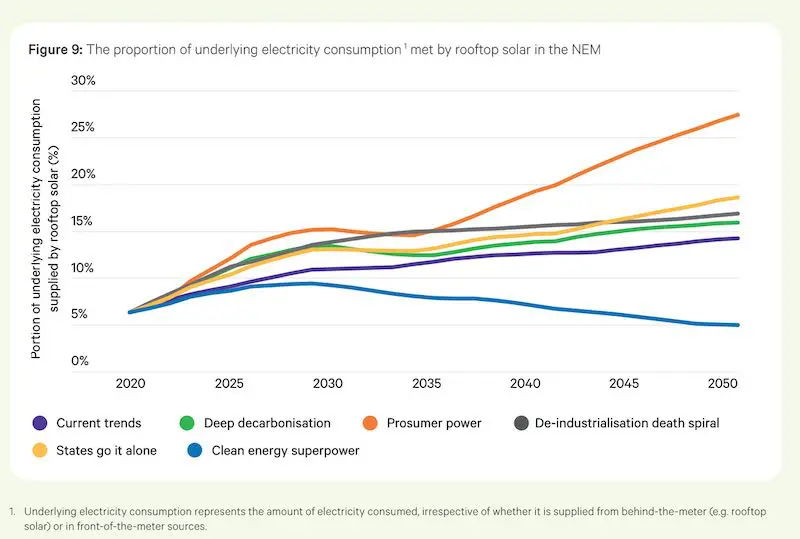 The Prosumer Power scenario also features higher amounts of dispatchable storage, as home batteries in virtual power plants (VPPs) and batteries on wheels in EVs “crowd out” pumped hydro and and grid batteries. 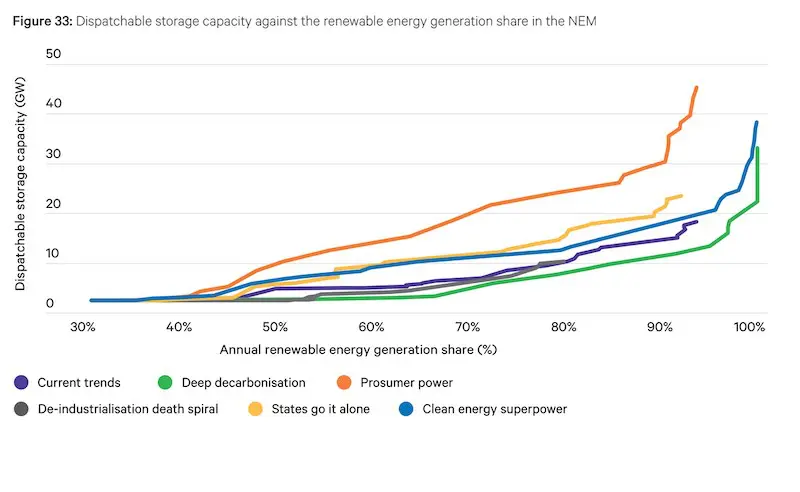 For Transgrid, the “standout finding” of the report is that Australia’s energy transformation will be net positive for Australian job creation, with Deep Decarbonisation modelled to create 45% more electricity sector jobs this decade across the NEM than a future where Australia continues to follow business-as-usual, the scenario Transgrid calls “current trends.”

“Our modelling included direct jobs in the electricity sector but if you consider additional jobs in other sectors
reliant on electricity, such as hydrogen, green steel and aluminium, the opportunities would be far greater,” said Transgrid executive manager for network planning and operations, Kasia Kulbacka.

“There are strong benefits to be gained from moving rapidly to achieve a net zero emissions economy. Supporting domestic and global decarbonisation will supercharge our economy, drive job creation and lower the cost of electricity.”